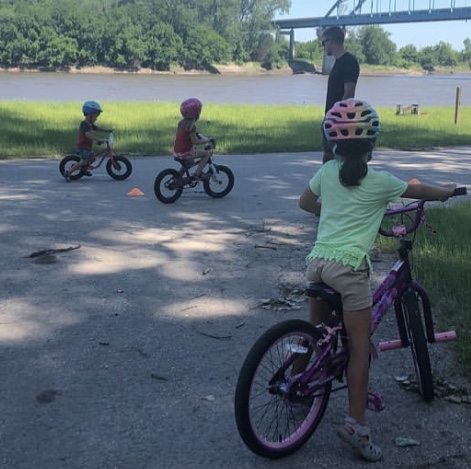 When I observe with some consternation and much concern the wanton destruction of some of America’s cities, I cannot help but wonder about the parents of these young people.

Are their parents dismayed? Are they filled with regret for the ways they indulged or refrained from disciplining their offspring? Or are they wondering how their child went so far astray after they gave him or her such a firm foundation?

I have firmly believed for a long time that parents can only take so much credit or so much blame for the adults their children become. Because, as individuals endowed with free will, each child gets a say as they reach adulthood. But there has to be some sort of guidance, some sort of example, some set of rules or, heck, even guidelines, for kids to follow to learn right from wrong. I wrote an essay for a magazine called On The Move about child rearing. My firm belief is that we should see bringing up a child in the world as the greatest project of which we as parents will ever be a part. And, as with any project, we should start with an end goal in mind. What’s our purpose here? Yes, we parents have children because our love for one another is something we want to share with the world and bringing a loved child into that world is the best way to share that love. Or it should be.

But sometimes I wonder what people are thinking when they have a child or children. If someone hasn’t taken the time, serious and sincere, to consider why he or she is here, why would that person bother to ponder the reasons for bringing another person into the world? I suppose. I don’t know what anyone else is thinking when a decision is made to have a child. I hope and pray most people are making an intentional, mindful decision. Of course you want to love your child, and you most probably will. But you ought to want to rear a child that other people in their community will like.

I am reminded of that song from Willy Wonka and the Chocolate Factory in watching the irresponsible and destructive behavior of those young people in cities like Portland and Seattle, among others. It’s the one the Oompa Loompas sing after Veruca Salt gets her comeuppance. You remember, don’t you?

The mother and the father”

Now, it’s not fair to solely blame the parents as I noted above. We as moms and dads cannot be responsible for our adult children’s decisions. They may in fact revolt against the values we tried to pass on to them, they may reject the critical thinking skills we endeavored to instill in them. They may have emotional or psychological or mental challenges we could not have predicted. See my blog entry about expectation management. (And I have to mention those innocent children who suffer from neglect by a parent or parents, or those whose parents are abusive.) But, what if some parents didn’t even try with the gift they are given in that tiny, helpless person? Whether through neglect, disinterest, or their own lack of values in things that help make the culture a more productive and positive place, if a parent decides to not give much guidance or the wrong kind of guidance to a child, maybe that results in many of these young people who are without direction and without a reason to want to behave in a civil and more responsible manner.

I don’t pretend to know. I do know, though, many young adults and older teens personally who would never be found in those riotous crowds. Who even now look askance at what is going on in these cities where property is being burned down, defaced, and otherwise destroyed by throngs of young people.  I have to say that the governments of many of these cities remind me of indulgent parents who either excuse, ignore, reward, or join in the behaviors of their misguided, often spoiled children.  When parents behave this way with their troubled or confused, even destructive offspring, the children, even as adults, will have very little if any respect for their folks. And so it is with the governments of these cities. You will be stepped on, attacked, rebuked, and otherwise treated very badly by the young people misbehaving, to put it mildly, in your cities. Mayors, council people, and all other governing entities will not be respected or listened to; they will often be vilified eventually, just like everyone else who is not tearing down the cities’ structures and livelihoods of other innocent citizens that live and work there.

And, of course, the absence of God and the law of love that a faith in God engenders, these are also a major part of the problem here, in my humble opinion. When a person does not believe in anything, we call that nihilism, he or she cares nothing for anyone’s rights or dignity, not even their own.

But we cannot just lament the behavior of these young people, nor should we condemn them (or their parents) personally, though we can condemn the things they have done. We’ve got to figure out a way as a society to change so that children learn that violence and a total lack of regard or respect for others is not an acceptable response to injustices, perceived or real. We need to help parents understand the magnitude of their mission.

Yes, civil disobedience has its place, but that should not involve violent or intimidating behavior, ruining a city to make your point. In those instances, the point gets lost anyway. People need to change, our cities need to change, our education system needs to change. You know what change involves, though? Repentance. Repenting means to reject the destructive ways you’ve lived and behaved. To repent is to change one’s mind, sincerely. And to repent will always include being sorry for the wrongs that one has committed, and asking forgiveness for them. And then it includes mercy and forgiveness from the injured parties.

We have got to work at the most basic level, the family, the neighborhood, the local churches and schools, and yes city councils, to get things back in some kind of order instead of the total disarray we see around this country. I’ve written about the importance of tradition in the past. Tradition is a passing on of what we’ve learned or know. But some things that have been learned or experienced need to be stopped. Or we end up with generation after generation that is lost and wounded, angry and hurting. And, as the saying goes, hurting people want to hurt others.

Only God can change hearts and minds, but we can help God in that effort. We can be the voice, the hands and feet, and the face of Jesus in the world. What if we love, forgive, guide, show through our actions that we believe respect for authority is a good thing? What if we show that we believe in our form of government that allows amply for change via the ballot box and petitioning for the reform or repeal of laws that are unjust toward anyone? What if we teach critical thinking skills to youngsters? We can explain that the ‘why’ of things matters. What are the second and third order effects of decisions and actions? What if we show how crucial and beautiful it is to love our neighbor and to reveal that our neighbors are everyone we meet? What if we share the love of God through the ways we love others and ourselves? What if we believe in something bigger and so much better than ourselves? What if we strive always toward the good?

I’m by no means perfect. But I’ve lived a long time and seen a lot, made lots of mistakes from which I hope I’ve learned a thing or two. And God has shown me what His forgiveness, mercy and love can accomplish in a person’s life. I do think it’s time to try something different. Because what we’ve been doing as a culture is not working in too many places in our country.

God help us, God forgive us, God have mercy on us. Show us the way, Lord. For we are so lost…

3 thoughts on “Teach Your Children*”