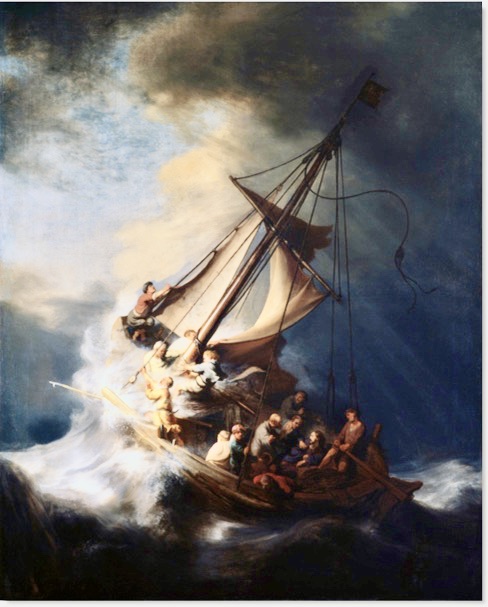 Today’s Gospel reading for our liturgical year is from Matthew. It’s the familiar account of the disciples who are in the boat with the sleeping Jesus when a “violent storm” comes upon them. It says that the boat was being “swamped by waves” in my version. So, you know, that’s a little scary. If the boat is filled with water it can no longer stay afloat, as we all know.

And so the terrified disciples wake Jesus up. Their words are, “Lord, save us! We are perishing!” Which is along the lines of, “We’re all gonna die!” They know, due to witnessing other miracles, that Jesus will do something to save them. They have no idea what, I’m sure, as evidenced by the final question from them, “What sort of man is this, whom even the winds and the sea obey?” For people of that time, in that area of the world, we know that their fear of the sea was great. Before the disciples’ ancestors came to be monotheistic, the peoples in that area believed there was a god of the waters, including the rains and the sea. The waters would sometimes churn and lightening and thunder would rage, dragging down many a sea going vessel, along with all the fishermen on board. They’d either witnessed that or heard stories from other fishermen in their culture about such things.

When they came to believe in YHWH, (the God we know), they realized that even the seas were created by God. The waters were not creators, but creatures, just like everything else in the world. It had all been created by God. The mystery of why the storms and the sea would get so ‘angry’ at times was just that, a mystery. The people of that period had no understanding of weather systems or the tides and such things. It was all awe inspiring and unknown. Even today, though scientifically we can understand how a storm is formed over the ocean and its effects that these elements combined can cause, we still can wonder about why God allows such things to happen. Especially when human lives are lost, on land or sea, due to these storms, i.e.hurricanes and such.

Though we will never understand the loss or devastation this side of Heaven, we can at least understand them logically and empirically. Small comfort when lives are lost, property destroyed. But we can know that God is with those who perish. And we know that there are many tenderhearted people who will rush to attend to the victims who remain after a terrible natural disaster. Those compassionate people who are moved to assist are God’s hands and feet, even His voice, to help comfort and sustain those who survive. God weeps with us in our pain and smiles or laughs with us in our joys. Remember that, too.

So, back to our recounting of the storm on the sea. Jesus was asleep and neither the rushing wind nor the torrents of water coming into the boat could wake Him. When Jesus asks, “Why are you so terrified, O you of little faith?” He is not admonishing them for waking Him up, I don’t think. But more for the way in which they woke Him. If they had faith in Jesus, they would still wake Him up, but not in such a frantic, ‘all is lost’ sort of way. For they would know that once Jesus was awake and aware of the situation, He would take care of things. And, indeed, Jesus calms the sea and the winds.

Jesus, true God and true Man, has complete sovereignty over His creation. Of course the winds and the sea obey Him. Just as Jesus can cure someone’s illnesses because He is Lord of all creation, so He can command the elements to do His bidding. The disciples should not have been amazed. Well, of course we should always be amazed by the things God can do. But they should not have been shocked.

And remember and rejoice, too, in the fact that God is all powerful and so He can dominate over any evil in our lives, too. God sends demons packing with some regularity in Scripture, and there is the great, definitive sign of His sovereignty over everything. But, in God’s greatest magnanimous gesture, He gives us humans free will. And has such respect for us that God will never ‘make us do anything’ we don’t want to do. What a blessing, that we can transform into a curse. Thankfully, God is also merciful. He forgives us anything if we repent and seek His forgiveness.

All we have to do is look at Jesus at the end of His earthly life, to see the forgiveness of the Lord on full, brilliant, amazing display. Hanging on the cross, abandoned, reviled, lied about, beaten, mocked, still Jesus asks His Father to forgive them all. When your beloved Teacher and healer is murdered in front of your eyes, a slow and tortuous death, no less, it’s going to be hard to trust. And again, just as in the storm, his disciples panic. And, in this case, they run and hide until Jesus ‘wakes up’ (see Resurrection) and again takes care of things. Though they did not understand how, they slowly come to understand.

What a lovely surprise for each of them. What a perfect gift for each of us. Jesus will always be with us in the storms of life, He will always love us and forgive us. So, go to Him with your concerns, your fears, and your suffering, but not in a panic. Go with confidence and joy that Jesus loves you and cares about you more than you can ever comprehend. Go to Jesus with the realization that He died for each of us because of that love. How can we be afraid? How can we doubt that it’s all coming together for our ultimate good?

We’ve got to understand that “happily ever after” is never going to be here. That’s for the next life, that’s for eternal life – with Jesus. But make no mistake: God is with us here. Alleluia! Here’s a song that’s a prayer so fitting for this reflection today! Thank You, Lord, for providing.